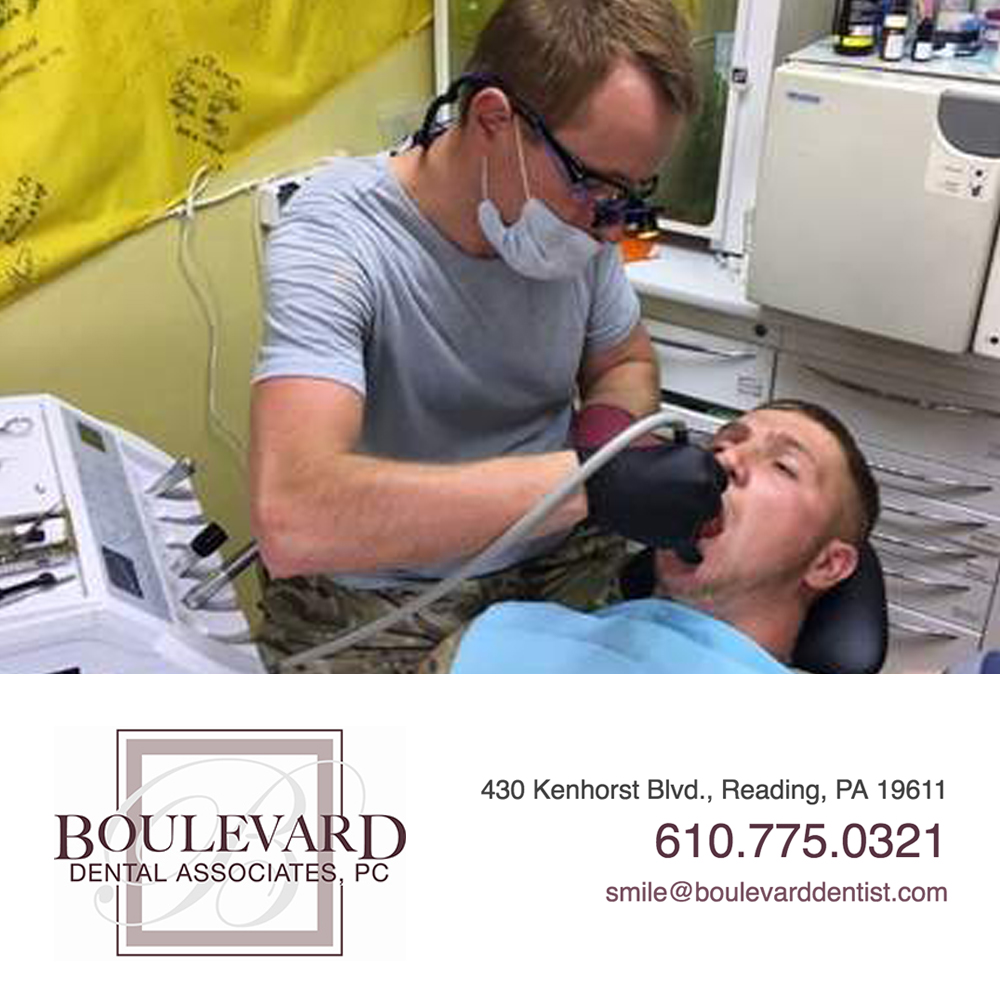 Tim Medianick traveled to the eastern border of Ukraine in May to treat soldiers on the front lines.

As bombs fell around him and sounds of battle filled the air, Reading dentist Dr. Tim Medianick worked to clean teeth and perform root canals in the middle of a war zone.

Dressed in camouflage, Tim provided dental care to soldiers along the eastern border of Ukraine, where Russian and Ukrainian troops have been fighting since Russia began making military incursions into Ukrainian territory in February 2014, annexing the Crimean peninsula.

In May, Tim took a 10-day trip to Ukraine with his family. While his wife and children returned home, he spent three days working with two other dentists near the front lines.

Tim was born in Kiev and immigrated to the United States in 1991 after his family faced discrimination for not joining the Communist party. At the time, Ukraine was part of the Soviet Union and under Communist control.

Now, Tim owns Boulevard Dental Associates along Kenhorst Boulevard in Reading. According to Tim, his trip in May was his first time returning to the country since his family settled in Levittown, Bucks County when he was 13.

“It was very emotional to be in Kiev, where I grew up,” Tim said. “I broke out crying one time because it was so overwhelming.”

Tim decided to go back after speaking with a Ukrainian dentist, Vladimir Gavriluk. Before going to Ukraine, he supported Gavriluk’s volunteer efforts by sending him packages with dental tools and materials, including fillings, drills and dental cement. According to Tim, these supplies are difficult and expensive to obtain in Ukraine.

According to Tim’s wife, Ann Medianick, his desire to take the trip and volunteer also stemmed from the recent loss of his father.

“Tim’s father was only in his late 60s, but just passed away from cancer at the end of December,” she said. “I think that was also a really big encouragement and made him want to connect to his roots.”

But after arriving on the eastern border, Tim quickly realized the enormity of his task. Many of the soldiers he treated had never seen a dentist.

“A lot of the dentistry is very poor in Ukraine, because there’s a lot of corruption,” he said. “Soldiers aren’t very well taken care of. Many times, you’ll look in their mouth and see there are teeth missing already.

Oral hygiene issues were exacerbated by the conditions in which the soldiers were fighting. Bombings were constant, and Tim said two soldiers were killed and five were injured during his time in the war zone.

“They get bombed every day,” he said. “Sometimes we would go until late in the night working, and you could hear the bombs exploding only a mile away. It was a real experience, and it’s crazy to think that this is what those people see every day.”

According to Tim, he was heartened by the work he was doing, but was dismayed to witness the fighting.

“I was excited to go to the war zone, but also worried, because of what I was going to see,” he said. “It’s very sad, seeing that my country and my people are suffering.”

Nevertheless, Tim and Ann are planning to return to Ukraine in hopes of helping more soldiers through dentistry.

“We both don’t feel this is the end,” Ann said. “We feel there are going to be future trips to Ukraine to help in some way.”

In the meantime, Tim will continue to donate dental supplies and reflect on what his experience has showed him.

“It was a humbling experience,” he said. “People were very appreciative, and they would ask, ‘Why would you come from America to a war zone?’ It’s because we love our people and we love God, so we want to serve them.”