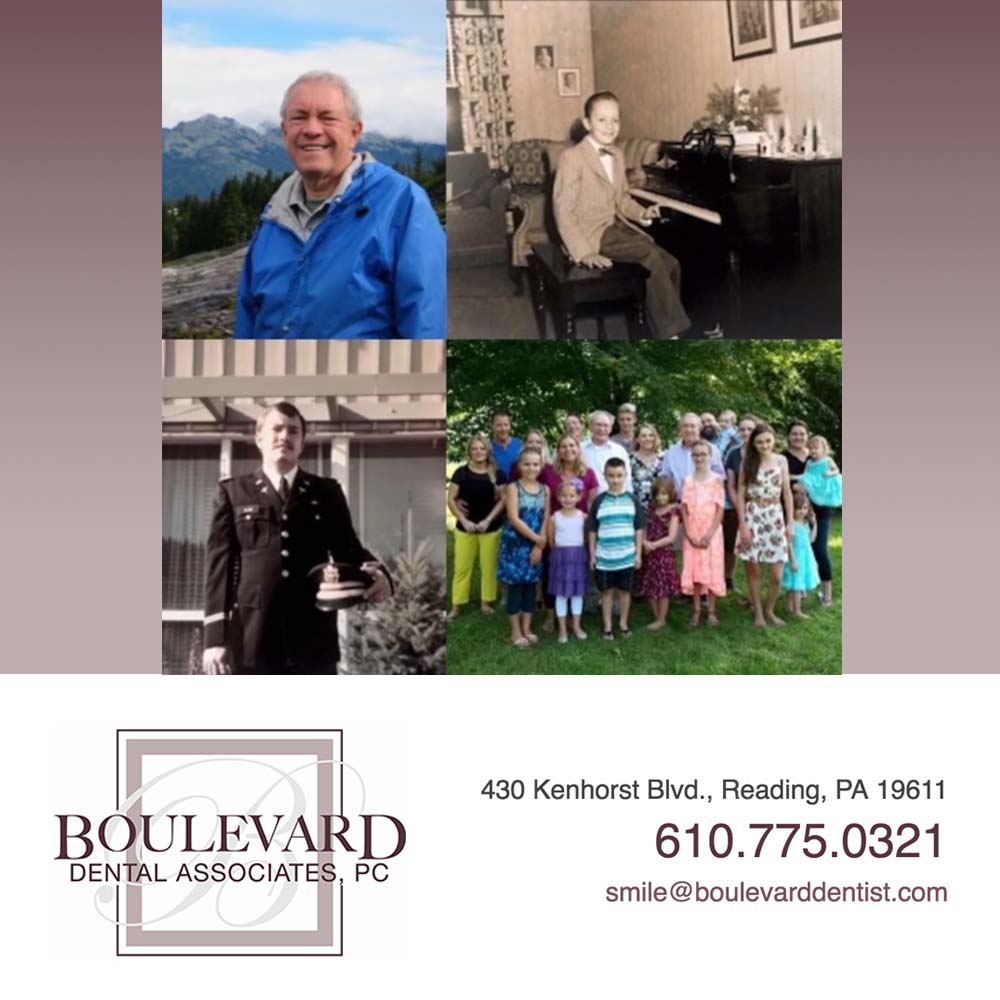 We want to take this opportunity to honor our beloved Dr. George Clark who passed away on Tuesday, December 14, 2021. We want to honor him by letting you know more about this faithful man who diligently served his community and family for many years. To do this, we have included some highlights of his life, followed by tributes from Dr. Tim Medianick, and Dr. Clark’s wife, Cheryl. Here is to a truly good dentist… and a truly good man:

George was born in West Grove, PA where his family lived until he was about six months old. His family then moved to West Lawn. He graduated from Wilson High school in 1964. He then went on to spend two years at Albright College, and then transferred to the University of Pittsburgh for one year. After that, he spent four years at the University of Pittsburgh Dental School and graduated from there in 1971. He married Cheryl on August 19, 1967. George was on active duty as a dentist from 1971 to 1973 at Fort Lewis, Washington State. Upon returning from Fort Lewis, he and Cheryl bought their home on Lancaster Avenue from Dr. Ernest Rothermel, and George worked at the dental office in their home for three years. He then joined the practice of Dr. Barry Angstadt at 430 Kenhorst Boulevard in 1976.  Dr. Kenneth Speicher joined the practice in 1980. After Dr. Angstadt and Dr. Speicher left, Dr. Tim Medianick bought the practice in 2008.  George also coached football from 1987 to about 1997 at Governor Mifflin High School. He and Cheryl had three children together: Timothy, Allison, and Jeremy. George retired in 2016 and was diagnosed with Parkinson’s Disease in September 2016. He passed away on December 14, 2021.

Dr. Tim Medianick, DMD, FICOI:
There are a few people in life who you can say truly changed the course of your life. Dr. George Clark was one of those people for me. I was practicing dentistry in Lancaster County, but I was actively looking to buy a practice of my own at the time. Other doors were closing, but one day I got a call from a Dr. George Clark in Shillington, PA. He heard about me through a family friend who was also a dentist. We met, and it soon became clear to both of us that we shared the same values–in dentistry, in family, and in life. I purchased the practice from Dr. Clark and Dr. Speicher, but Dr. Clark stayed working as my associate. It is extremely rare in the field of dentistry for this type of arrangement to work. But Dr. Clark had the utmost respect for me; he supported me fully in this role. Dr. Clark was my associate, but also my friend. His practice was perfect for me because we shared so much in common. We are deeply grieved over Dr. Clark’s passing, but we know he is in perfect peace. Thank you so much, Dr. Clark, for your legacy…a legacy of which I am a direct and extremely grateful recipient.

Cheryl Clark:
My words are to honor the man who truly loved and provided for his family for over fifty years.
“Whatever your hands find to do, do it with all your might.” This is a fitting description of how George lived his life. Whether it was dentistry, teaching Sunday School, planning a trip, coaching football, taking cooking classes, learning how to wallpaper, or trying to better his golf game–he did it with all his might! The only time he sat still was to watch a ballgame or when he was at a concert. He was easy to talk to and he took a genuine interest in all the people with whom he came in contact. He cared about his patients–not just about their dental needs.

He thought he was an only child until he found out he was adopted when he was in his mid-forties. We found two half siblings (on his father’s side) through Ancestry, who graciously welcomed him into their family only two years ago.

George came to faith in Jesus Christ in 1972 while he was a dentist in the U.S. Army at Fort Lewis, Washington. This changed our lives in ways we couldn’t imagine. Our next-door neighbor was a chaplain who spoke about God as if you could actually know Him and interact with Him. We just kept going to the chapel and we watched how Jim and his family lived their lives. Their love for God and service to people changed how we looked at life. We were changed on the inside, and life had meaning and purpose. We aren’t perfect, and we had some very hard times through the years, but we were beggars who knew where to get the bread. Though I miss George sorely, I can rejoice that he is now whole, no more suffering in mind and body, and in his heavenly home. George is truly existing in the presence of God and we will see him again sometime soon, for life is short and death awaits us all. To God be the glory!

–With these words, we honor you, Dr. Clark.